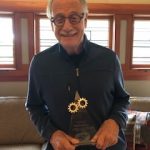 On behalf of the NRPCA, its members, and it Board of Directors, we wanted to acknowledge Fran’s long-time contribution not only to the Club itself but all the activities he’s supported and promoted through-out the years. Many fondly recall opening your home on East Ave after the restoration project was completed, but mostly for your contributions as a 35-year member. Long time contributor as a driver, a racer, an instructor and a mentor. He raced both in PCA and IMSA. In many ways Fran was considered the godfather of our DE program having been a founding member of Trackmasters which is still a vital organization today. He’s been a driving influence since 1990 and a brand ambassador critical to encouraging many to try their first event with HPDE. He provided encouragement and mentoring those who ended up going racing.
Fran set the standard for motorsport style – race ca graphics always a work of art.