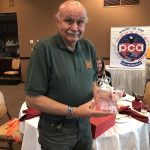 In 2012, we celebrated our Region’s 50th Anniversary in grand fashion at Glenora Wineries and during the celebratory dinner, we gave out two noteworthy awards honoring two long serving members recognizing them for their efforts and dedication to the Region. Fran McAllister, one of our Region’s first Presidents and Herschel Hirschauer, one of our longest serving members were both honored with a Lifetime Membership Award.

Recognizing worthy and deserving members is not necessarily a new tradition with Niagara. Every year since 1999, and during our annual Fall Dinner, we award the “Deegan” to deserving members who for the past year demonstrated service head and shoulders above the rest of the membership. Since 1999 we have awarded the Deegan 18 more times in honor of its first recipient, Dan Deegan.

Dan was always very generous with his time and helpful to many members It is no wonder there is the Deegan Award.

So it seems only fitting that Dan would be in line for yet another
award.
Dan is a rare example of a PCA member who’s done pretty much everything in the world of PCA and continuously for over a long period of time. Past President, Chief Driving Instructor, Tech Tactic presenter/participant, Swap meet organizer/participant/vendor for the club, A Nationally recognized Concours judge, multiple Parade participant (20+ times and counting), tech sessions, a thorough and knowledgeable resource for club members, and much much more.

Dan is also a member who embodies a true Porsche enthusiast and is a great example of what a dedicated PCA member can be. Indeed, we are very fortunate to call Dan one of our own: a Niagara Region member.