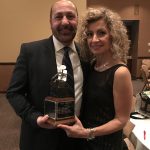 Dominic and Maria joined the club in 2012 and have been active members since.  Always ready to volunteer and help out at an event, to taking on the Annual Fall Dinner for the second year in a row.  They are valuable assets to our organization.

The Deegan was originated in 1999 as a way of recognizing outstanding volunteers to the Niagara Region Porsche Club of America. The trophy is made from old Porsche valves and fashioned to look like a figure in a driving position including a steering wheel.  The first year’s recipient went to Dan Deegan.

Breakfast Run to Ellicottville has been cancelled